This article was written and published by Melody Mercado, Des Moines Register on December 18, 2020.

Now a senior, Bos has watched the coronavirus pandemic disrupt what was supposed to be her moment to shine.

Yearbook staffers and advisers across the state are asking themselves: What do you put in a yearbook during a year of canceled 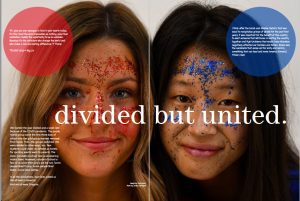 Editors Taryn Mock and Jordyn Cimmiyott, both Johnston High School seniors, photographed designed the opening spread for the 2020-2021 yearbook. The staff’s goal is to publish about 200 pages for the book, just slightly smaller than a non-pandemic book.

“We weren’t able to plan this summer,” said Bos, 17. “Plus a lot of classes were being cut because of virtual learning … so I didn’t think it was going to be possible.”

Despite the lack of a traditional school year, high school yearbook classes across the metro are pulling together to create at least one tangible memory in a year of virtual existence.

Yearbook classes reinvented themselves into remote, virtual newsrooms; many changed their editing software to online platforms that could be accessed by everyone through the Internet. Staff members had virtual brainstorming sessions, advisers dropped cameras off at student homes, staffers relentlessly reached out to sources. And any type of event that took place in person — they covered.

“I want (students) to know that they’re actually pretty lucky that they have a yearbook this year,” said Sara Perdue, 17, a senior editor at North High School in Des Moines. “We have spent so much time on it.”

Marc Havnen, a representative with the yearbook publishing company Herff Jones, works with roughly 30 schools in the metro area as a liaison between the schools and the publisher.

Despite the challenges of the 2020-21 school year, Havnen said all of his schools are making yearbooks. He said the company has been flexible with deadlines and thinks it will be worth the effort in the end.

“It really is going to be impactful. It’s going to be a history book that they’ll show their kids,” said Havnen.

The pandemic took away vital summer planning for many yearbook staffs. When school resumed in the fall, they had to work even harder to design page layouts and templates.

With some districts starting the school year in a hybrid format and Des Moines Public Schools starting virtually, the futures of sports, clubs and in-person activities were uncertain.

If a school was in a hybrid learning model, students physically attended school for half of the week and spent the half learning remotely at home. If a school was 100% remote, that meant no clubs, sports or in-person activities could be held.

Despite the unpredictability, all sports and clubs have had pages dedicated in their schools’ yearbooks.

Getting photos was the hardest part 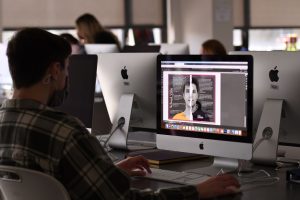 Staff member Erik Mitchell works on a spread covering different opinions about the school’s climate in the high school journalism lab. This year’s theme is “Divided but United.” Yearbooks record history first-hand, and the staff felt capturing the many differences of opinions was important.

The greatest appeal of yearbooks are the photos. Students want to flip through the pages and see themselves hanging out with friends, cheering at sporting events, acting in school plays or just eating lunch. Social distancing and other COVID-19 mitigation efforts have made those photo opportunities almost nonexistent.

Yearbook staff and advisers had to get creative, being aware of and attending any event that could be photographed.

At Johnston High School, although spectators were not allowed at sporting events, Leslie Shipp, the school’s journalism adviser, pushed for a press pass for their senior editor, Jordyn Cimmiyotti.

“Jordyn ended up taking, I think, every single fall sport photo … marching band, all the dance team, all the cheerleaders, everything that was an activity because you couldn’t get in,” Shipp said.

When Des Moines-area high school students stepped into the hallways for the first time on Nov. 10, the yearbook staff worked overtime, getting as many photos as they could. Their work proved to be pivotal, as classes once again switched to 100% virtual learning the following week following a surge in the state’s COVID-19 case levels.

At East High School, the editors coordinated an outside photo day for all fall sports. AS of Dec. 17, East High School, along with the rest of DMPS, had not had a traditional picture day for students, faculty, clubs or sports.

“The days we were in school, we were able to get like 500 photos,” Bos said. “We had our fall sports show up to take photos, because that was the only chance we were actually going to be able to see them.”

“We had to have something, even if it was just four days’ worth of material,” said Natalie Niemeyer, a journalism advisor at East. “That week was exhausting. The editors definitely stepped up; they all took shifts,”

At East and North high schools, the yearbooks still have placeholder spots for traditional head shots in case a picture day can occur in the spring.

Jennifer Dryden, journalism adviser at North High School, said the school also has an alternative plan, since picture day might not even occur in time. The yearbook class will be accepting portrait submissions from students and staff. To get the word out, they are launching campaigns via email and social media to encourage students to participate.

Perdue said that, ironically, in a generation of students obsessed with social media, it has been very difficult to get her peers to submit any photos.

“I’m worried … just because people don’t answer their emails, but I think we’re also going to send them to parents, too, so they can tell their child to do it,” Perdue said.

Editors at East and Johnston have expressed similar sentiments.

“I’ll email them first. If they don’t respond I’ll go through (Microsoft) Teams. If I can find them on Instagram, I’ll message them there … try all different platforms to see which one will get a response,” said Selena Gonzalez, a sophomore at East.

Niemeyer said many students just don’t feel comfortable taking photos at home, and some don’t have the means to take headshot-style photos on their own.

“Teenagers are just kind of in a weird place right now, so having a photo taken of themselves just maybe isn’t at the top of their list,” said Niemeyer, “I think that’s why we’re having trouble getting students to submit.”

Showing life as it is

To get more students involved, editors are creating more feature pages dedicated to life outside of school. Traditionally called a “student life” section, these pages focus on a student’s interests outside of the classroom and can cover topics such as exotic pets, guilty pleasures, jobs, cultures and many more.

“We’re covering student life stuff more than we’ve ever covered before. Everybody has a life outside of school, and it was a better opportunity to cover kids who are connected in other ways,” said Shipp, the Johnston journalism advisor.

The yearbooks also won’t shy away from including the difficulties of the pandemic. Some will showcase stories of students who have had COVID-19; the positives and negatives of virtual learning; and perseverance among student-athletes.

“Whatever was happening, we were there.” Dryden said.

These feature pages will take the place of many traditional pages such as homecoming, and other annual events, but pages earmarked for certain clubs will still find a way to feature those members.

If an annual school play was canceled, the spread that would have featured the play will still find a way to feature students from the theatre program. It will highlight virtual projects, senior members or feature stories about those students.

“We made it different, but we’re still covering the same thing,” Bos said.

Each school is planning for about 160 to 200 pages in their yearbooks. With about half of the school year over, there’s still a lot of room for changes, but editors are determined to fill those pages.

“This is the proudest thing they’ll do until they go to college or get a job….. This was really hard work for our editors,” Dryden. “I think a lot more problem solving went into it…. I think that’s 2020 in a nutshell.”

Melody Mercado covers the eastern Des Moines metro for the Register. Reach her at mmercado@registermedia.com or Twitter @melodymercadotv.