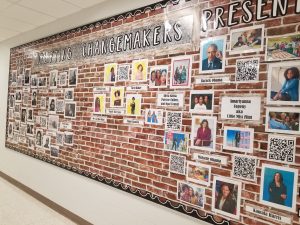 A large display outside the JMS cafeteria exposes students to historical and modern-day changemakers in our society.

Honoring the contributions of Black Americans spans beyond the month of February for students and staff at Johnston Middle School. Recently, JMS teacher Shannon Clark assembled a large display of “Changemakers” past, present, and upcoming to celebrate the historic contributions African-Americans have made to our collective history.

The display incorporates many of the well-known Civil Rights-era changemakers, but leaves a large portion to share the stories and actions of more modern-day figures, such as the Obamas, Kamala Harris, Amanda Gorman, and the three women who founded the Black Lives Matter movement – Alicia Garza, Patrisse Cullors, and Opal Tometi.

There is also a growing collection of young Black Americans that may be more familiar to middle school-aged students, such as Brea Baker, Mei-Ling Ho-Shing, Nupol Kiazolu, and more. As students walk by the display, they simply hold up their phone or ipad to the QR code by each person to learn more about them. It’s a method that reaches students where they are and also serves to expand their knowledge beyond the most famous and historical African-Americans. 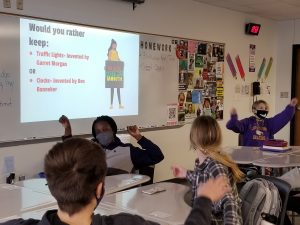 Students in Shannon Clark’s PRIDE time warmed up with a game of Black inventor “Would You Rather?” to challenge their minds and thinking.

During the JMS PRIDE time, teachers are incorporating ways to bring awareness and understanding of the significance of African-Americans to our society, such as a game of Black Inventor “Would You Rather?” In Clark’s class, she challenged students to contemplate the invention they would rather have in their lives, such as potato chips (invented by George Crump) or peanut butter (invented by George Washington Carver). Clark said warm ups like these get the class thinking, talking, and ready to discuss deeper matters related to Black History Month and the overall importance of African-Americans in our society.