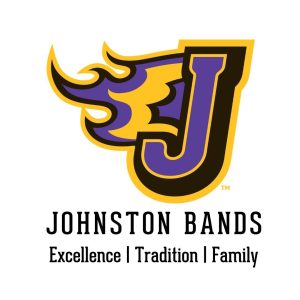 All band members participate as members of the Johnston High School Varsity Marching Band. The marching band is active from early August until the middle of October. The marching band appears at all home football games, several marching contests and local parades. The marching band does require a commitment beyond normal school hours. Students are expected to attend our marching band camp, which is held in August as we learn our marching music and much of our marching drill during that time. During the marching season the band also regularly rehearses at 7 a.m. Students need to be in the band room at 6:45 a.m. to transition outside to the field, so we can start rehearsal at 7 a.m. These rehearsals are necessary in order for us to be our best. The marching band will rehearse in all types of weather, so please come prepared with appropriate clothing. The Varsity Marching Band is an important part of the fall football atmosphere at JHS as well as a highly regarded marching unit throughout Iowa. Pride, discipline, and dedication make this group a success.

Because of our increased numbers in the high school band program we will have two concert bands in the first semester and three concert bands during second semester. Concert band starts at the completion of the marching band season in the middle of October. The groups are selected based on an audition held in the spring.   Students are placed in the group in which they will be the most successful. All bands perform at multiple home concerts and festival performances. Our concert bands are the core of our band program at JHS. The skills learned in concert band transfer to all other aspects of the Johnston Bands experience.

There will be three jazz bands this year at JHS. Auditions occur in the preceding spring for the following year’s jazz bands. Students must be enrolled in a high school band in order to participate in jazz band. All jazz bands will rehearse in the mornings following the end of the marching season and may also have scheduled evening rehearsals. All three ensembles will perform at concerts and contests throughout the year.

Every student is invited but not required to participate in solo and ensemble contests. We hope to put together a variety of ensembles for our participating students. Students who wish to prepare solos for the contest will be required to pay a fee to help pay for accompanists and judges (should we host our own contest). Students will be expected to put in considerable practice time in order to have success at this event.

The 9th Grade Concert Band is the core instrumental music ensemble for 9th grade band students.  The band plays a variety of literature ranging from traditional concert band music to more contemporary pieces.  9th grade band students should have successfully completed 8th grade band or receive permission from the instructor. The band typically performs three home concerts. Students are also encouraged to participate in solo and ensemble contest. These are rehearsed during lessons or before/after school.

The 9th Grade Jazz Band is made up of members of the concert band who play saxophone, trombone, trumpet, bass guitar, guitar, piano, vibes, and drum set.  The band gives one or two home concerts and annually competes at two jazz festivals.  The band focuses on big band jazz repertoire with an emphasis on improvisation.

The 8th Grade Jazz Band is made up of members of the concert band who play saxophone, trombone, trumpet, bass guitar, piano, vibes, and drum set.  The band gives one or two home concerts and annually competes at two jazz festivals.  The band focuses on big band jazz repertoire with an emphasis on improvisation.