(Information used from the Iowa Department of Education) 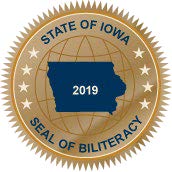 In October 2018, Iowa Department of Education Director Ryan Wise announced a state Seal of Biliteracy would be available for participating schools to recognize students who demonstrate proficiency in two or more world languages by high school graduation.

To receive a seal, students in participating schools must demonstrate proficiency in English and at least one other language through approved assessments. All languages will be recognized, including Spanish, Bosnian, Chinese, and American Sign Language. About 140 languages are spoken in Iowa.

“Communicating in more than one language will serve our students well in their college and career pursuits, as well as in our global economy,” Wise said. “The Seal of Biliteracy is about formally acknowledging this important 21st century skill and giving students whose first language is not English an opportunity to validate their native languages.”

Iowa’s Seal of Biliteracy was established as part of Senate File 475, adopted by legislators earlier this year.

Participating schools will identify students who have met eligibility requirements and determine whether the seal will be included on student diplomas or high school transcripts. These schools also will be subject to annual state reporting requirements.

“We hope that all schools throughout the state will offer Iowa’s Seal of Biliteracy to their students because it is a wonderful opportunity,” Wise said.

For more information about the Iowa Seal of Biliteracy, visit the department’s website.

How Will A Student Earn the Seal?

Students should contact their school counselor, world language teacher, ESL teacher, or AP English teacher to learn more about the testing requirements and available testing dates. Students and/or their families are responsible for all fees related to testing, if applicable. The Johnston Community School District is currently working with the Urbandale and West Des Moines districts to secure a metro-area location for testing.

To earn the seal, students must show demonstrated proficiency in a given language. Read more about the biliteracy guidance, including proficiency levels and accepted assessments here.

Once a student has passed the assessment and is approved, they will earn the Seal of Biliteracy, which goes on their diploma and high school transcript.  Earning the seal does not count toward earned credit.

Why Should Students Earn the Seal?

The Seal of Biliteracy encourages students to pursue biliteracy, honors the skills our students attain, and can be evidence of skills that are attractive to future employers and college admissions offices. Being able to know and use more than one language is a critical skill for the 21st century. The Seal of Biliteracy:

Above all, it is a recognition of a student’s accomplishment, hard work, and dedication to learning another language. Students can be proud of this for many years to come.